Welcome new members to your ensemble

How to welcome new members to your ensemble, as suggested by Tommy B.

I like many things. Being a nerd, playing Pathfinder, performing improv comedy, freestyle rapping, everything xbox, and my lovely wife Dr Jaime Besterton. 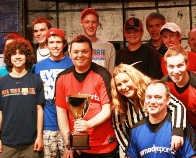 Spam Blocked (this is good)