The Pathfinder Society sends a team of agents to meet an important contact in an unassuming restaurant in Absalom’s Ivy District, but not everything is as it seems. What the Pathfinders find there will lead them into a lion’s den of danger and intrigue in the City at the Center of the World.

I GMed this as tier 8-9, and enjoyed it. However, there was never a problem for the PCs. I did have the pleasure of having 2 synthesis summoners at the table, so that could have been part of the issue.  Most combats, the baddies were outnumbered 2-1 (at least). The common bad guys were pretty easy, and dispatched in 1 or 2 turns. The BBEG was pretty sweet, and I like her abilities.

I was hoping the PCs would have all failed their will save when the special thingy happens.

I give this 4 stars. Good, but not challenging.

Another video from CSz vs Philly

This was done before the NBA playoffs. *sigh* oh Derrick Rose…

Blow up that PDF

So I run a lot of Pathfinder games. Each of the games are from  a scenario downloaded from paizo.com. The PDF has a ton of info. Baddies to fight, maps of the areas, fun images. When GMing online (using MapTool), I need most of the images in separate files. So, how do I extract all of the images in a PDF.

Simple. I use the linux command line tool pdfimages. This works great for a linux or mac.

All you have to do is go to the pdf’s directory in a terminal and run:
pdfimages -j filename.pdf outputname

Make sure you use the -j option to make all things a jpg instead of a ppm file.

Another tool that helps with creating a pdf for just the chronicle sheet is docsplit. In fact, I wrote a small bash script to take a folder of pdfs and extract the last page of each pdf. This only works if the PDF is 100 pages or less.
#!/bin/bash
folder=$1
destination=$2
for file in `ls $folder`; do
docsplit images -d 300 $folder/$file -p 100| grep "Requested" | awk '{ print $13 }' | xargs docsplit images -d 300 $folder/$file -o $destination -p
done

All of this is for the love of Pathfinder.

I am going on a few trips this summer.

I may as well update this

Since I got hacked again and am moving the blog off of my own server to wordpress.

Some updates:
* Today, I hit 52 scoots. Should be no problem getting 100 this year. Sweet.
* I’m still getting screwed by United, although they offered Jaime & I $200 coupons. We think it should be more. Oh United…
* We are putting our condo back on the market, and finally have come to realize that we will lose a lot of money regardless of when we sell it. Here is the old listing. Here is the new listing.  At least we are refinancing our house to a 03% interest rate. Bad ass.
* I have 94 Pathfinder GM credits. 4 more until I am a 4 star GM. There are 5 people who understood those sentences.
* Jaime’s Pop MTLI & Ms Kathy were in town for almost a week. Did show stuff and a few touristy things. Fun times.
* Congrats to The Playground for celebrating 15 years! I have nothing but great memories of that place.
* I’m still going to the guym, but I should really go for longer than 45 minutes.
* I may buy a bike. They seem fun.

Here is a copy of an email I just sent to customerrelations@united.com (thanks onyoursi.de)

Hello,
My name is Rene Duquesnoy (Premiere Silver, number BVP06854), and I have been a loyal United flyer since I began flying frequently in 1999. I have accrued almost 400,000 lifetime flight miles, and usually have excellent experiences with United (and affiliates). I’m writing this email to complain about the worst flight experience I have had on united. This trip was booked on February 25th, 2012, and is from Chicago O’Hare to Maui. Please note, that my eTicket number for this was 01621501045891, and the one for my wife, Jennifer Landolfi, (via miles) was 01621401058664.

Here is my trip chronologically, and the corresponding issues.
* Sunday, 29 April – Check in for the flights at ORD. I check 2 bags, and one weighed approximately 60 lbs. Scuba gear is heavy :). No issues, no fees. Everything looks great for our trip.
* Sunday, 29 April – Flight UA0849. Chicago O’Hare to Denver. My locator is WM95X4, and we should be sitting in seats 20A and 20B. Well, I was upgraded, which normally is wonderful and appreciated. However, my wife was not. As a loving husband, I would prefer to sit with my wife in economy. Unfortunately, my seat had been given to someone else and the flight was completely full. I had to leave my wife. Not a big deal, but not something I would prefer to do.
* Sunday, 29 April – Flight UA0525. Denver to Maui. Fortunately, we were able to change my ticket around and sit next to each other. Our problems happened when we arrived. One bag arrived, and the other one didn’t. We filed a delayed baggage report (OGGUA22841) and got our bag late that night. We had to buy some clothes & toiletries, and I’ll be calling that department for the reimbursement. Not a big issue, but still, another problem we had to deal with.
* Sunday, 6 May – Check in for the flight at OGG. We were told by the ticketing representative that I’m allowed 1 bag and it has to be under 50 pounds. This was shocking as we expected the same parameters for bags as when we checked in on 29 April. Not only did I have to pay an additional $35 for the second bag, but we had to do the crazy dirty clothes shuffle to get our scuba bag under 50 lbs. The ticketing person couldn’t explain the problem, just that the computer was right about this stuff. Also, since we were flying OGG-SFO on 6 May, then SFO-ORD on 7 May, we wanted to check our bags all the way through to ORD. This wasn’t allowed. I don’t know why, and neither did the agent. The agent was cordial and nice, just not as helpful as we wished.
* Sunday, 6 May – Flight UA0824. OGG to SFO. The flight was fine. Our seats were together, and we were happy to return home. Since we had to check our bags to SFO, and not to ORD, we went to the baggage claim to retrieve them as expected. However, the bags didn’t show up with all of the other bags. There were a group of customers who were missing bags (mostly gate checked). After the baggage crew spoke a few times with the missing baggage folks, it was determined that all of the bags were just hanging out on the belt prior to arriving to the claim area. Someone pressed the magic button, turned the belt back on, and voila…everyone’s bags. This could have been worse, but we still wasted some time while people were figuring out stuff.
* Monday, 7 May – Flight UA0694, SFO – ORD @ 12:55. We go to the airport to catch our flight. Check our one bag in as we didn’t want to have to pay an additional bag fee, and head through a relatively short security line. We thought this would be painless, until we see a note that our flight had been cancelled. The line at customer service was long, and we estimated it would take 45 minutes at least to talk to a representative based on the line moving at a snail’s pace. So, I called the toll free number, and spoke to a wonderful woman who was able to book us on UA0403 that left at 15:36. Our seats weren’t together, but I’d rather leave sooner & barter with other customers than have to wait for a later flight. This wasn’t the next flight, just the next one we could get on. Once we arrived in Chicago, we went to the baggage claim and waited for our bags. Only 1 showed up. I had to track down the other that was on an earlier flight.
To summarize, our bags weren’t handled properly, there were different bag parameters when we checked in, a flight got cancelled, and we were forced to sit away from each other.

This made us very unhappy.

My question is what can you do about it? We want to continue to support United Airlines (even with the flyer I received about having “unqualified” pilots on regional jets that was given to me at SFO by a United pilot). I think that it is fair that we each receive a $500 credit on United for future air travel.

Here are some fun pics from Maui. We are having a blast. 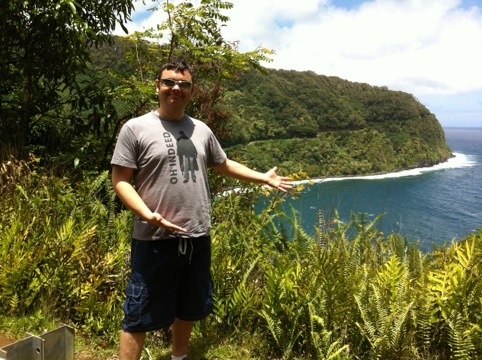 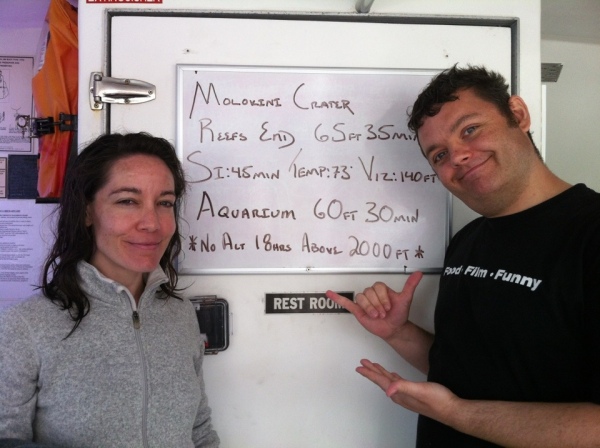 That’s right nerds, Jaime and I are diving. Really fun. We just finished 6 of our 8 dives. Tonight, we dive a cathedral. Mahalo!

I like many things. Being a nerd, playing Pathfinder, performing improv comedy, freestyle rapping, everything xbox, and my lovely wife Dr Jaime Besterton.

Spam Blocked (this is good)